Masai Ujiri will forever be remembered for the move that brought the Toronto Raptors their first NBA title in 2019. And as for being forgiven for trading DeMar DeRozan, his transgressions were erased the moment the Canadian-based outfit won its fourth game against the Golden State Warriors in the NBA Finals.

Since then, the Raptors have lost both Kawhi Leonard and Kyle Lowry, with the former opting to move to the Los Angeles Clippers right after helping fire the team to sporting immortality and the latter heading to the Miami Heat via trade last season.

It will likely take the Raptors a while to return to such heights but, if that’s to happen, Ujiri will get them there his way like only he is known to do. The Raptors president and vice chairman strives to be different and unorthodoxy is pretty much his style.

“We’re in a copycat league. Everybody wants to do what another person is doing,” Ujiri told reporters at a press conference recently, per The Athletic. “Go play like Golden State. Well, we don’t have those types of players. You know, it’s hard to find those types of players. So, for me, we have to create ways where we think we’re going to win in this league, because it’s about winning. And I feel strongly that we can create our own style of play and bring these types of players and figure out a way to do it. Look, will it succeed? I pray it does. I’m hoping it does. And I think it will.”

The Nigerian-Canadian executive prides himself on pushing against the norm and, while it can get him in hot water from time to time, the Raptors are almost always better off for it.

Things haven’t been all that normal for the Raptors, or anyone else for that matter, over the past couple of years. They were the team most upset by the pandemic as they were forced to move to Tampa Florida last season.

This season, they’re the only team that can’t put their players on exhibition in front of a capacity crowd due to provincial COVID-19 restrictions. They’ve played their last game in front of just 500 fans and will be playing three at half capacity in March, before they’ll be allowed to operate at full capacity for the last nine games of the season.

Fewer home fans should translate to less of a competitive edge but the Raptors were 10-3 before playing the Denver Nuggets on Saturday; that is since the province scaled capacity limits back late last year. They were 6-9 prior to that.

The Raptors got off to a pretty rough start to this season but are currently in a play-in spot and have every opportunity of getting themselves into a position in which they could play postseason basketball. It wouldn’t be that much of a risky bet to throw some money at their playoff chances and, for fans in Canada, Ontario sports betting apps will be sure to have odds going on the 2019 champs’ playoff prospects.

“Just like anything, you struggle for energy,” Ujiri continued. “You struggled to adjust to it overall. For me, I feel this game is all about playing, winning, human interaction. It’s the biggest thing I feel sometimes, and it’s lost. I know there are people that are going through more (than the Raptors). There are people that need to come out more in terms of having the ability to open businesses and get back to real life. This is the business I work in, and I have to push as much as I can for the business that we work in and the game that we play.

“They tried to take their time to do the right things. The way it’s trending, I’m hoping maybe we can get back sooner than the proposed dates.” 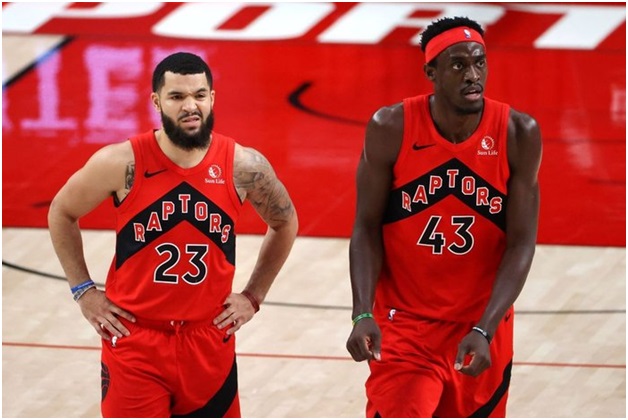 Meanwhile, the Raptors are keen on building around a core made up of five players but they will face some difficulty given that Pascal Siakam and Fred VanVleet are turning 28 this year while OG Anunoby will be 25. Gary Trent Jr. is 23 while rookie Scottie Barnes is just 20.

The normal thing to do would be to choose one end and, while Ujiri loves developing players, he’s planning to do it all his own way as he believes his older stars could become even better during the latter end of their careers.

“If I look at the template of Kyle Lowry and DeMar DeRozan, they started (ascending when they were) 27, or around that time,” Ujiri said. “So who am I to say that Pascal or Fred can’t get better? … That’s the composition of our team. And that’s for me (to figure out). You have to mix in these players. I feel strongly that Fred, Pascal, these guys can get better. They are going to get even better than they are now.

“Do we have to be at a championship level where all of them are 27 years old, 28 years old, peaking and now we’ve reached the championship? And this is what we’re doing? I wish I could look at it and tell you, like, that’s the way it happens all the time. It’s not that way.”